View all posts by Sherry Listgarten

Well, it was an interesting few days. Our electrical service should be running quietly in the background. Instead, he made headlines almost every day. Sometimes it appeared that we were managing our power grid through a text alert. This is no way to manage critical infrastructure. I’m sure we can all agree on that.

And let’s not forget that we had record heat for much of the week, in triple digits in a state that is not used to it or built for it. Since, as the saying goes, this is one of the coolest years of the next few decades, we’ll see more. Severe heat waves have significant implications for our health, for the environment, for productivity and the economy, for inequalities. We’ve delayed climate action for fifty years, and here we are.

So what do we get out of it? Here are some of my thoughts. As always, I look forward to hearing yours in the comments.

In the next few years, network-connected devices are expected to supplant alerts.

Text alerts are not a way to manage a power grid. Among other things, they lose their effectiveness when fired too frequently (ahem). CAISO CEO Elliot Mainzer agrees, writing that “I too look forward to the days when Flex Alerts are a thing of the past!”

We need tools deployed as soon as possible that will help us use more energy at the right time without effort on our part. And if we can make money using them, so much the better. Smart charging of air conditioners, pool pumps, heaters and EV chargers will save us money and reduce emissions by invisibly shifting our energy to when it’s cheaper, cleaner and more abundant. If the peak slowly shifts from summer afternoons to winter mornings as we add more electric heat, we shouldn’t need to know or care.

These tools are being developed, tested, and deployed across the state, including by our largest utilities. It won’t be smooth sailing, but it’s important.

In the meantime, maybe we should ditch the alerts anyway.

While frequent warnings may be ineffective in reducing demand, they are particularly effective for one thing, namely creating distrust in what should be a fundamental public service. As someone succinctly put it, “Damn, CAISO, stop asking us to do your job for you! (1)

Perhaps people would be happier, or at least less annoyed, if CAISO stopped pleading and the power went out quietly with a brief warning a few hours in advance: “The power may go out for an hour or two between 6 and 9 p.m. tonight during this record-breaking heat.” Stop asking people to conserve. Many don’t like it, some take offense to it, and it puts much of the state on edge. Instead of that, tear off the band-aid. Just a thought.

Power discharged from EV batteries will be of great help.

Today, California residents have about 450,000 electric vehicles with a range of 200 miles. Most of these EV owners can save 20 kWh (perhaps a third of their battery) over a 3-hour period on occasional triple-digit days, and would happily do so when paid for it. This would add up to 3 GW of power for three hours, which is almost all we need during these events. Even if we only got 1 GW, that would cover a lot of the shortfall on those very hot summer evenings. This power source will only grow as the population of electric vehicles grows rapidly.

Electric vehicles are integrating this capability – some already have it – but we need to figure out how to quickly and cost-effectively deploy the solar-like grid infrastructure needed to enable much more ubiquitous two-way charging while ensuring our grid remains safe and secured. .

The minor inconveniences are just that – minor.

Some people live off kvetch, especially online. But we should stick together to deal with small things like a brief power outage, rather than magnifying them and worrying about everything that could go wrong. In the rare event that someone urgently needs to charge an EV just when the power goes out, give them a ride! The big issue here, in my opinion, was the heat wave, not the prospect of a brief announced outage.

An effort can be both spectacular and imperfect.

I wrote earlier that CAISO’s efforts (and results) over the past few days have been “spectacular”. They were also clearly defective. Attempts at particularly difficult or new things often hit both targets. CAISO had experience and good preparation, but this heat wave was still very difficult to manage. They foresaw and quantified the challenge well and managed to maintain the grid largely with some issues during a time of great tension. The effort and the result in my opinion have been spectacular. While there are areas for improvement, and we need to point this out, we need to appreciate the progress and exercise some patience given the magnitude of this challenge.

Mitigating and adapting to global warming is not going to be a picnic.

Yes, that can mean things get a little messy at times. We look ridiculous using our network via text alert. But, you know what, it worked. It may not work over and over again, but we will continue to learn and we will continue to improve. And in the meantime, California is reducing emissions faster and more transformatively than most other states and even countries. This is what innovation looks like. I am extremely grateful to live in a state that makes such an effort and does it in a disciplined way.

Finally, I don’t think pushback happens because people don’t like change. People clearly like change. We follow the latest fashions, travel to new places, discover new restaurants first. Sometimes I think people are homing missiles for novelty. I find this sniping that “Well, they just don’t like change” to be dismissive at best and just plain incorrect. Rather, I think what (most) people don’t like is change that leaves them feeling out of control. Even though CAISO has a structured and carefully thought out program to deal with network strain, calling an entire emergency and placing resident calls leaves customers feeling like they and their network are out of control.

We need to do a better job of figuring out where the network is heading and where we are on that path. When people don’t understand that, an event like this can make them anxious because the state seems to be driving it.

Now that you have the opportunity to reflect, I would like to know what is going through your mind after last week.

Notes and References
1. By the way, it’s not just California that does this. Texas does it too. And I get it, it saves a lot of money while preventing breakdowns. But it can also erode trust.

Interesting fact: in many cases, the batteries of electric vehicles last longer than the cars themselves. As a result, there has been a steady stream of slightly depleted EV batteries to solar farms, and battery recycling companies are running out of supplies. 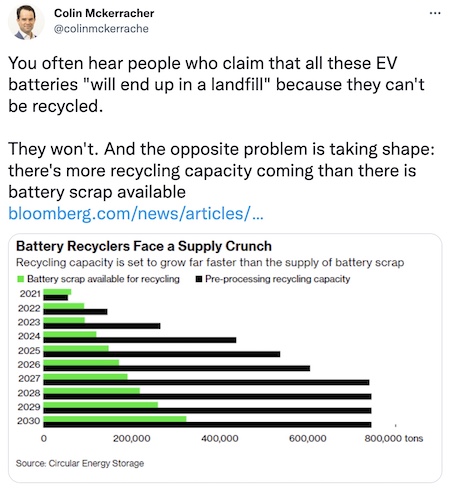 Comment Guidelines
I hope your contributions will be an important part of this blog. To keep the discussion productive, please follow these guidelines or your comment may be edited or deleted.
– Avoid disrespectful, derogatory, sarcastic, angry or ad hominem comments.
– Stay factual and refer to reliable sources.
– Stay on topic.
– In general, maintain it as a home space for all readers.

Democracy.
What’s right for you?

Please ensure that your comments are truthful, on topic and not disrespectful to another poster. Don’t be sarcastic or belittling. All postings are subject to our TERMS OF USE and may be deleted if deemed inappropriate by our staff.

The Long Tail of ColdFusion Fail – Krebs on Security

Earlier this month I posted a story about a criminal hacking gang using Adobe Cold Fusion vulnerabilities to create a botnet of hacked e-commerce sites that were exploited for customer credit card data. Today’s article examines the impact this botnet has had on several companies, as well as the important and costly lessons these companies […]

BeReal Social has just become the most downloaded application (video)

Image credit: ColdFusion What is BeReal? Will it last? What does it tell us about the direction society might take? Everything you need to know about the most exciting social media app. After launching in 2020, the French social media app gained popularity earlier this year. What some call the “anti-social media” app, BeReal pushes […]

It’s Not Cold Fusion… But It’s Something

A surprising opportunity to explore something new in chemistry and physics has arisen. In March 1989, electrochemists Martin Fleischmann and Stanley Pons of the University of Utah announced that they had “established a sustained nuclear fusion reaction” at room temperature. By almost everyone’s opinion, the event was a fiasco. The basic reason was that the […]